Thailand and Moldova Approved
For Onboard Digital Publications

Ro-Ro Ships Save on Oil Costs

Shell Marine’s recommendations on medium-speed engine oils selection have saved approximately $123,000 annually for its customer Hainan Strait Shipping, a Chinese operator of ro-ro tonnage. The company switched its trunk piston engine oils to a combination of Shell Argina S3 40 and Shell Gadinia S3 40 for six ships operating in the South China Sea. With this change, Hainan Strait Shipping was able to reduce maintenance and lubricant costs while improving the efficiency and longevity of its MAN diesel and turbo engines.

James Fisher and Sons (JFS) has expanded its capabilities in the Middle East with the acquisition of Murjan Al-Sharq Marine Contracting LLC (MSMC), a service provider based in Saudi Arabia, with a record of projects with Saudi Aramco. The acquisition brings local expertise into the JFS group and adds nearshore marine construction and maintenance capabilities to the JFS offer, supported by new, high-quality vessels and equipment from MSMC and the group’s existing shallow-water fleet.

MacArtney headquarters has recently repurposed the old salmon-smoking facility in Hjerting to accommodate a new 2,500-sq.-m facility that incorporates workshop space for electronics, fiber optics, cabling and mechanics. Since moving into the new facilities in March 2018, the workshop has delivered a number of ROTVs to the oil and gas and ocean science markets, completed defense contracts, and provided civil engineering and renewable energy system solutions.

The Department of Homeland Security’s Science and Technology Directorate and the National Institute of Standards and Technology developed standard test methods for robots, which th

The Japanese government plans to open a $100 million research and development facility in 2020, called the Fukushima Test Field, dedicated to improving robotics aimed at the Fukushima cleanup effort. The facility will be centered on 20 different obstacles, terrains and other challenges, plus air and water navigation.

Asian Coast Guard Ships to be
Equipped with Surveillance Gear

CONTROP Precision Technologies will equip an Asian country’s coast guard with its iSea EO/IR maritime surveillance payloads. The systems will be deployed on several maritime vessels this year for territorial water protection missions. The systems include a long-range thermal camera, a visible surveillance camera and an eye-safe laser range finder, as well as advanced image processing and video enhancement algorithms, an automatic video tracker and automatic gain control.

The investment fund Rotterdam Port Fund has acquired a stake in ExRobotics. With locations in Breda and Delft in the Netherlands, the firm is a pioneer in the development of robots that can be used in environments with a high explosion risk. Its modular robots enable remote inspection of oil and gas facilities, and the technology will be further developed in cooperation with various institutes in the Netherlands and abroad.

On Feb. 28, 1879, graduate engineer Robert Ferdinand Noske set up his metal workshop in Altona near Hamburg for the construction of ventilation and central heating systems. Noske made a name for itself with innovations and patents in marine systems. Early successes, such as outfitting the Imperial Navy’s “Mars” troopship in 1880, solidified the company’s reputation. NOSKE-KAESER Maritime Solutions, now turning 140 years old, is currently headquartered in Hamburg’s Steilshoop district, with operations in Australia, India, Malaysia, New Zealand and Turkey.

Majority of UAE Business is Acquired

Horizon Geosciences announces a change in shareholding: Boskalis has acquired a 62.5 percent share in the United Arab Emirates (UAE)-based business. The balance 37.5 percent shareholding remains unchanged and continues to be held by the company managers. Horizon has an ongoing capital investment program, which includes the recent acquisition of the DP2 vessel Horizon Nomad, the construction of work-class ROVs and acquisition of additional geotechnical and survey equipment.

Korean Register (KR) has completed a comprehensive cybersecurity audit of Songa Shipmanagement and has certified the company to be fully compliant in all areas, the first company to achieve the certification. A formal presentation took place in February at Songa Shipmanagement’s offices near Glasgow, Scotland.

Norwegian energy firm Equinor will deploy Sonardyne cabled subsea instrumentation to increase the accuracy of time-lapse seismic data at the Johan Sverdrup oil field. Equinor plans to use seafloor-based seismic cable permanent reservoir monitoring technology to maximize recovery rates. Subsea 7 will install a Sonardyne pressure inverted echosounder instrument to measure the two-way travel time of sound waves propagated through the water column from the seabed to the surface as well as the pressure (depth) at the seabed.

Pukyong National University has chosen GE’s power conversion business to provide the SeaStream dynamic positioning (DP) system for their training vessel for fisheries industry training. The system will enable the ship to control horizontal movement and hold position against harsh wind and in choppy waters for long periods of time. SeaStream DP is a smart system that will contribute to the ship’s efficiency and operational effectiveness.

The Russian Zvezda shipbuilding complex located in the Far East will be rebuilt to accommodate construction of a giant icebreaker ship ordered by the government. The icebreaker project is in response to a Kremlin order last year to increase shipping across the Northern Sea Route to 80 million t by 2024, The Barents Observer reported. The shipyard reconstruction will be managed by Rosneft together with Rosneftgaz and Gazprombank.

The Women’s International Shipping & Trading Association (WISTA) has launched an inclusion pledge that addresses the underrepresentation of women in the maritime industry through a series of statements aimed at embracing diversity through individual action and personal responsibility. Individuals are encouraged to sign the pledge in support of a diverse and inclusive maritime sector at wistainternational.com/pledge.

Students from All Saints Catholic High School in Sheffield have been crowned champions of the Subsea UK 2019 STEM Challenge, which saw five teams from the U.K. compete to design an ROV to collect ocean plastic. The STEM challenge, led and organized by Subsea UK, saw more than 50 teams of secondary-school students compete in regional heats to earn their place. The winners from each regional heat traveled to Subsea 7 in Aberdeen in March to take part in the competition. 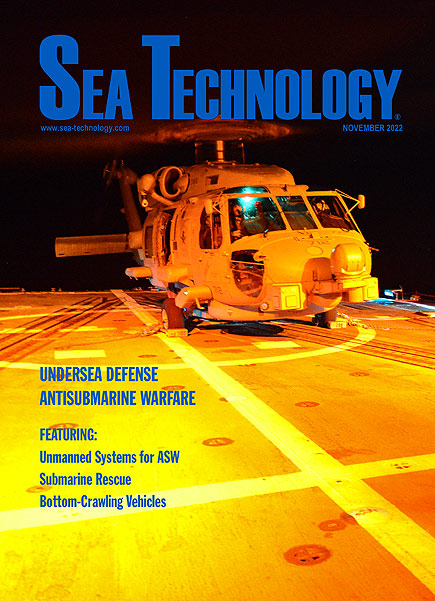